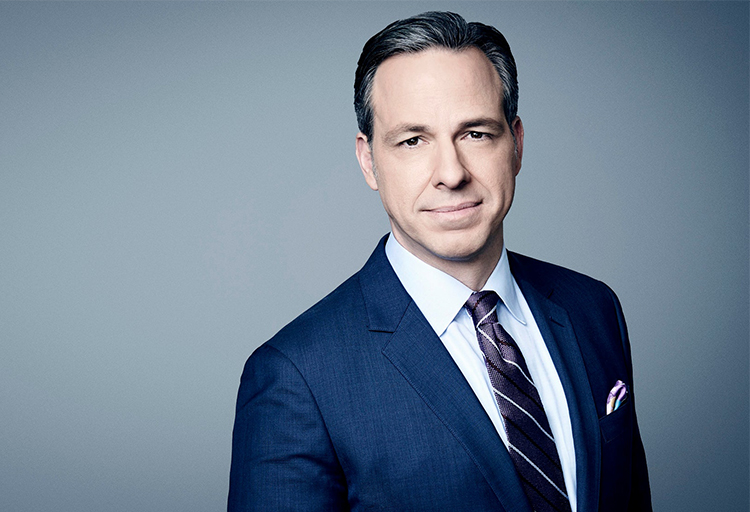 CNN’s chief Washington correspondent Jake Tapper anchors a two-hour weekday program, The Lead with Jake Tapper, which debuted in March 2013. He has hosted CNN’s Sunday morning show, State of the Union, since June 2015. He presently serves on the advisory board for Military Veterans in Journalism, and we are honored to present him to our community and supporters of newsroom diversity as the keynote speaker for the MVJ 2021 convention.

Tapper imparts his political expertise on State of the Union by conducting interviews with top newsmakers on politics and policy, covering Washington, the country and the world. The Lead covers headlines from around the country and the globe with topics ranging from breaking news in politics and world events, to health, faith, politics, money, sports, and popular culture.

Most recently, Tapper lent his political expertise to CNN’s 2020 election coverage, playing a pivotal role in the network’s extended coverage of the race with expert analysis on projections throughout the unprecedented, week-long event. Called “tough and quick” and “a staunch defender of facts in the Trump era” by The New York Times, Tapper has been celebrated for standing up in a nonpartisan way for truth and decency during a period where the U.S. political world has seen shortages of both.

Tapper has been a widely-respected reporter in the nation’s capital for more than 20 years. His reporting on the 2016 election has been recognized with a number of awards, including a 2017 Walter Cronkite Award for Excellence in Television Political Journalism, the Los Angeles Press Club’s Presidents Award for Impact on Media, the John F. Hogan Distinguished Service Award from the Radio Television Digital News Association, and The Canadian Journalism Foundation’s Tribute to Exemplary Journalism.

In addition to his reporting, Tapper has also authored five books, including his debut novel The Hellfire Club, published in 2018, The Outpost: An Untold Story of American Valor, published in 2012, Down and Dirty: The Plot to Steal the Presidency, which was published in 2001, and Body Slam: The Jesse Ventura Story, which was published in 1999. The Outpost debuted in the top 10 on The New York Times best seller list, and Tapper was one of the executive producers of the critically acclaimed film version of The Outpost, directed by Rod Lurie and released in 2020. The sequel to his novel, The Devil May Dance, will be released on May 11, 2021.

Tapper has been active in bringing attention and support for veterans’ issues. Since 2017 he has organized an annual celebrity eBay auction to build specially-designed mortgage-free houses for severely injured veterans of the wars of Iraq and Afghanistan via the top-rated charity Homes for Our Troops, a group for which he serves as an ambassador. In 2018, he was awarded a People’s Choice Vetty during the 3rd Annual Vetty Awards, an annual award ceremony presented by the Academy of United States Veterans. In 2014, Tapper’s book and his reporting on the veterans and troops were cited when the Congressional Medal of Honor Society awarded him the “Tex” McCrary Award for Excellence in Journalism.